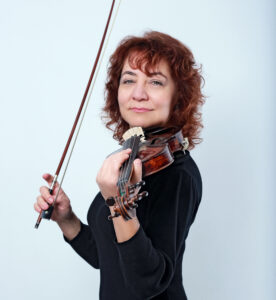 Aliza Keren is an artistic stage name, which means in translation from Hebrew “A ray of joy”. Since June 2017, it became my official name (my former name is Inna Isakova). My music is classical, jazz, and songs of my own composition. It is melodious and harmonious, and my artistic conviction is “music for the soul, a close feeling for every person”.

At concerts, I see a response in the eyes of my listeners. Every time, I am reminded of the true purpose of my music: to give people happiness.

Teaching is another part of my musical vocation. I believe that the violin is one of the ways to know our Universe.

Musicial competence is not the final goal,  but instead using the instrument for spiritual development of a personality. I guide my students with the support of music, which connects the material world with the spiritual one stronger than any other art.

Music influences human emotions because it opens the feelings and soul and has a great healing power. I teach my students to tap into this power again and again, by playing and listening to harmonious notes.

I worked as an independent long ago. Now, I cooperate with musicians and other creative people in the Keren Aliza Project.

Participation in the jury of online music competitions

Performances on the Israeli TV and radio

Chamber orchestra of the Saint Petersburg University, concertmaster of orchestra

The seminar “The Guided imagery”, the trainer’s seminar according to the method of the professor Gagin

Improvisation training of the beginner players on a stringed instrument (a violin, a violoncello) and positioning of hands: Materials of the International distance scientific-practical conferences.
Samara, SamLuxPrint, 2018

Training in music in Skype. Modern technologies and techniques of  the professional music education:
Materials of the International distance scientific-practical conferences.
Samara, SamLuxPrint, 2011

Songs for adults and children

Plays and arrangements for violin and violinists ensemble

1. To consistently expand the musical program and places of performances
2. To record more CD, including:

3. To patent and release a training game about the theory of music and harmony for beginners
4. To create the system of training for teachers according to the technique “Little dwarfs”
5. To create the Internet system to support and to train of  beginner adult violinists (monitor updates of the website!)
6. To publish note textbooks for beginner violinists:

– songs with words and pictures for 4-6 years old.
– children’s violin jazz for the intermediate level

If you have interesting thoughts about the offer of cooperation, I will be glad to discuss it!

5 years old. I hear an older girl playing the violin in kindergarten. This left a great impression on me!

6 years old. I am assigned to play on a violin at music school, opposing my mother’s expectations of playing “the piano as a hobby”.

10 years old. I am the director of the violin department who convinced my parents (who were engineers) to be less pessimistic about my professional education. I had no idea at that time how things would turn out!

12 years old. The Children’s Violin Ensemble from all the music schools in Leningrad (under the direction of I.A. Ratner). There were interesting rehearsals even on the weekends, which I attended.  I remember performances in many different concert halls, friends and laughter. Now I see that it is important and necessary to give children the powerful experience of performing with an ensemble (improving their acting and stage skills).

15 years old. At this point, I understood that it would be impossible to choose anything but music as a career. I decided to attend a music college. The basis of my work was with children  (4 and 5 years old), and I began teaching the violin under the influence of my teacher,  L.S. Karpova. I knew I wanted to teach in a music school.

19 years old. I taught at the music school and also played in the orchestra of the Saint Petersburg University as concertmaster. I instructed beginners and amateurs of music.

I entered the St. Petersburg conservatory in the class of the remarkable violinist and teacher A.A. Fischer. “Do you want to remain only as a teacher at the music school?  You should set your sights higher!”, he  said. So I decided I would do just that.

The third year at the conservatory involved training with S.S. Azizyan (who is now in Copenhagen). He, as well as A.A. Fischer (who went to work under contract in Sweden) are violinists who carried on the traditions of the famous school of Auer-Eidlin-Vaiman.

The “Classic” Orchestra. It became clear to me that if you do that kind of work your  whole life, it gets boring …

23 years old. Repatriation to Israel. I trained with the violist M.B. Kugel.  I had doubts about my future in the musical world, as many other musicians were unemployed and were considering changing their profession …

30 years old. Revolution! A fateful meeting with Emil Kunin, a jazz violinist and teacher. As a results, I developed a technique of training small children, led a children’s vocal group and a childrens’ violin ensemble. I began performing, wrote a music composition and recorded several CDs thanks to his training and using elements of his unique technique. You can read and listen to everything on the website “Violin Jazz Creation”.